Read about the time when real-life Jai-Viru Dharmendra and Amitabh Bachchan got together to celebrate 40 years of Sholay!

Sholay, the 1975 action-adventure film is one of the biggest films in Bollywood history. It was so well received that even today, 42 years later, people quote Sholay dialogues and sing its songs all the time! In 2018, the cast of Sholay reunited to celebrate 40 years of the film! During the event, actors Dharmendra (Viru) and Amitabh Bachchan (Jai) relieved their Sholay days and praised each other. The love between the two friends was evident and it reminded everyone of their hit song, ‘Yeh Dosti Hum Nahi Todenege.’

Dharmendra praised Amitabh Bachchan and said that he is always surprised to see how much Amitabh works every day. He said that he really likes how Amitabh still works a lot and he is like a younger brother to him! He clearly adores Amitabh and Jaya Bachchan and he spoke very endearingly about them to the media. Actresses Hema Malini (Basanti) and Jaya Bachchan (Radha), who are Dharmendra and Amitabh’s wives in real life too, were also present at the event.  Amitabh and Jaya Bachchan were married a few months before Sholay and she was also pregnant during the film. And it is on the sets of Sholay that Dharmendra and Hema Malini too fell in love. They married five years later! 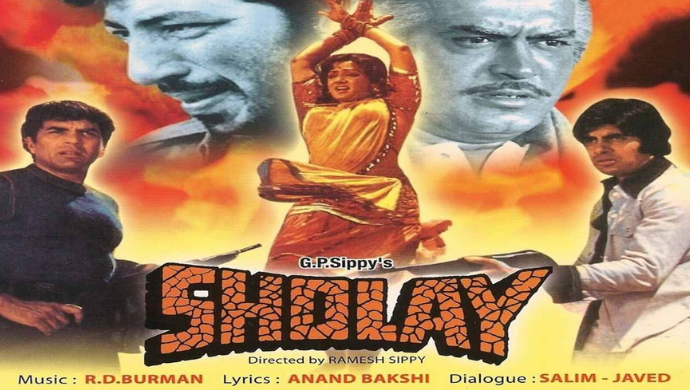 Amitabh Bachchan also told the media how Dharmendra and Hema Malini and the Bachachans actually live very close to each other in Juhu and that he can meet them any time he wants but a lot of times it gets difficult to meet. He was very glad to be at a platform where everyone was together on a stage! He praised Hema Malini for working in politics as well as still dancing! Dharmendra too took this opportunity to let everyone know that Amitabh Bachchan is the engine of Bollywood right now!

We loved how even after 40 years, their bond is strong and full of love!