Rakul Preet Singh has something lovely to say to Sidharth Malhotra’s bathtub shoot pics, where he features with candles and all. Have a look at her reaction

Since the success of his film Shershaah, actor Sidharth Malhotra has been in the news. The gorgeous actor impressed everyone with his performance in the film and is currently working on numerous more projects. Fans of the actor frequently enjoy seeing snippets from his shoots on his social media profile, and on Monday, Sidharth surprised everyone with a visual treat. This time, though, his visual treat wowed his followers, and even Rakul Preet Singh reacted to it.

Sidharth took to Instagram to post a shot from one of his sessions in which he could be seen reclining in a bathtub. As he posed, the Shershaah actor appeared to be encircled by a swarm of candles around his bathtub. Sidharth made a taunting glance at the camera, sending netizens into a frenzy. Sidharth, on the other hand, had a humorous take on the gorgeous shot, joking about waiting for a soap. Rakul Preet Singh couldn’t stop giggling after seeing his photo and description and commented, “Acha” with laughter emojis. 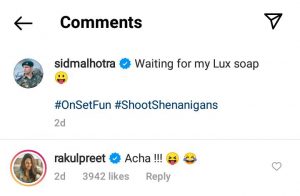 Sidharth was recently photographed with Kiara Advani during the premiere of Vicky Kaushal’s flick Sardar Udham. The couple looked stunning as they made their way to support Vicky and his flick.

Meanwhile, Sidharth has been preoccupied with filming. Mission Majnu, in which he co-starred alongside Rashmika Mandanna, has already concluded. The film is an espionage thriller, and Sidharth will play the protagonist. Shantanu Bagchi directs the film, which also stars Ronnie Screwvala, Amar Butala, and Garima Mehta. Aside from that, Sidharth has Thank God, which he co-wrote with Ajay Devgn and Rakul Preet Singh.

The Hindi version of ‘Manike Mage Hithe’ will star Nora Fatehi and Sidharth Malhotra. The unique love song will include Nora’s popular danceability, with Sidharth matching her movements.

Indra Kumar’s ‘Thank God,’ starring Sidharth Malhotra and Ajay Devgn, is a slice-of-life comedy directed by Sidharth Malhotra. On Tuesday morning, the film’s producers revealed that Yohani will make her Bollywood debut with the Hindi version of her song, which has gone popular online. ‘Thank God’ will be released in theatres next year.