Rakul Preet Singh Heaps Praises On Vicky Kaushal For His Latest Film; Wants To Give Him THIS Prestigious Award

Actress Rakul Preet has always been in the headlines for her professional and personal life. The De De Pyaar De actress recently made her relationship official with actor-producer Jackky Bhagnani. Actress Rakul Preet Singh recently turned several heads during a fashion show in Mumbai where she wore a sequined lehenga and looked gorgeous during the walk on the ramp. Actor Vicky Kaushal is in a huge buzz right now for his outstanding performance in his recently released digital film. Netizens and Bollywood superstars can’t stop themselves from appreciating the outstanding acting skills of Vicky Kaushal.

After watching his digital film, Vicky Kaushal’s Bollywood buddy Rakul Preet, went insane with his performance and the actress took to her social media page and congratulated him. She appreciated her talented friend in the post. The Yaariyan actress expressed her feelings. Rakul was quite emotional as she was completely blown out after seeing the film. She even asked Vicky Kaushal that how did he perform such a phenomenal character. She said it was such an effortless, nuanced performance by Vicky. She also mentioned that it won’t be wrong to say that he deserves an Oscar award for his acting chops in the film. 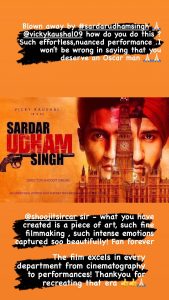 She even congratulated the director and she said that what he has created is a complete piece of art, with such fine filmmaking, along with such intense emotions captured so beautifully as she is his fan forever. Towards the end of the appreciation post, she also said that the film excels in every department from cinematography to performances. She thanked the entire team for recreating such a wonderful movie and bringing back that era.

Indeed everyone from the Bollywood fraternity is astonished by Vicky Kaushal’s performance. Recently, Katrina Kaif also took on to her social media to congratulate her rumoured boyfriend Vicky Kaushal for his digital film.

On the work front, Rakul Preet will soon be seen May Day, Thank God. The actress will also be seen starring opposite Farhan Akhtar in Ashutosh Gowarikar’s next directorial.