Nia Sharma’s Home Is An All White House With Statement Pieces; Inside Photos Are Too Delightful To Be Missed

Nia Sharma a while ago had posted a picture of her new abode with her online family which needed some of its finishing touches and shared this milestone with her virtual family. Fans were very proud of Nia to tick off a wish from her wishlist and jump to achieve her next goal which is awaited to make it on the gram with the accomplishment tag.

The actress recently had her Grah pooja where some bits and pieces of the new home are visible and it’s a beautiful white affair with statement pieces which are a perfect balance. The apartment overlooks Mumbai’s sparkling skyline. From beautiful chandeliers to floor to ceiling windows, and a perfect view to the city from above, Nia’s home has it all. She was also spotted wearing a sparkling blue dress for the pooja and shared all smiles with her closest friends for the camera and gram. 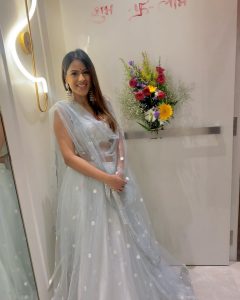 Vinay Sharma, Nia’s brother, also posted a couple of pictures of him posing in their new house. “Happiness is cutting the tags right before wearing your new clothes in your new abode,” he captioned his Instagram post.

Nia got her first big break in the television show Ek Hazaaron Mein Meri Behna Hai, in which she played the parallel lead, Manvi Chaudhary. It went off the air in 2013. She was then cast in Jamai Raja in 2014. Nia also recently unveiled that how she didn’t have work for nine months straight but that didn’t break her confidence to keep on going and chase what she wants. Nia’s stubborn behaviour and patience looking at everything optimistically has given her the high she’s on in her current period. 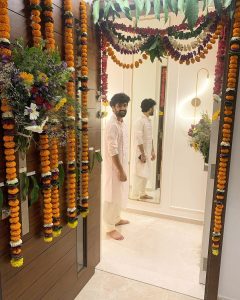 Nia was recently seen in a music video titled Do Ghoot. Her last acting project was the second season of the Zee5 series Jamai 2.0, which also starred Ravi Dubey.