Sudhaa Chandran has shared a video on her social media accounts regarding her ill-treatment at the Mumbai airport. She received an apology from the CISF on Twitter. Amid this, Kangana Ranaut has offered her support to the veteran actress

Sudhaa Chandran is currently making headlines. The actress opened up about an incident where she was asked to remove an artificial limb at the security check. The senior actor shared a video on her Instagram handle. wherein she was talking about how she had to remove her prosthetic leg at the security check at the airport whenever she has to travel.

The veteran actress-dancer received an apology letter from the Central Industrial Security Force on Twitter. The actress felt hurt and appealed to Prime Minister Narendra Modi do to the needful in the case. The video which was already viral on the Internet grabbed the attention of Actress Kangana Ranaut. The actress has supported actress and dancer Sudhaa.

Kangana Ranaut took her Instagram handle to support Sudhaa Chandran by sharing her video on her story. Kangana wrote, “Sudhaa Ji is a veteran artist…. A great dancer and actor…. Inspite of losing her leg she achieved great heights in the field of dance… hope she gets due respect”. Sudhaa stated every time she visits for her professional work, each time, she is stopped at the airport. the airport officials still asked me to detach her prosthetics leg and show it to them. She had made a plea to Prime Minister Narendra Modi. 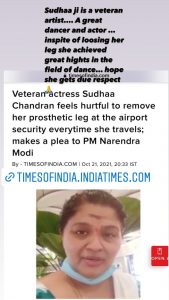 On the professional front, the actress took to social media to announce the release date of the film, Dhaakad which looks like a thrilling spy actioner. Kangana recently entertained the audience and critics with her best performance in Thalaivii.