Kangana Ranaut aka the queen of controversies is known to speak her mind in current issues and her remakes often raise our eyebrows. The actress recently took to her IG stories and mentioned Alec Baldwin’s prop gun firing accident

Kanaga Ranaut is known to be the queen of opinions and her remarks often grab headlines. The actress is loved for her acting sense and fashion style but, her opinion surely makes her stand out in the crowd. The Tanu Weds Manu actress is known to the world for her impeccable and adroit skills in her craft and has even won national accolades for it.

Kangana Ranaut had recently taken to her gram and mentioned through her stories that how the accident oF Hollywood actor Alec Baldwin’s accidental gun firing incident on the shooting sets of Rust which killed the cinematographer and injured the director with a prop gun. 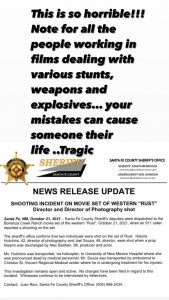 Kangana Ranaut reacted to the news and said that the news is horrible everyone working in the films should make note of not promoting the use of guns, weapons and explosives on the sets. The actress feels that human life is at a loss if such tragedy keeps on happening and it is extremely shameful.

The actress said that she too has had many near-death experiences while shooting for her films and someone else’s carelessness can cause someone to die on the film’s set. The actress feels that the loss of human life is extremely bad and tragic. Kangana Ranaut hopes that the film fraternity looks after such matters and does not let any mishaps take place. The actress is loved for her bold opinions and often makes headlines for the same.

On the professional front, Kangana Ranaut was last seen in Thalaivi for which the actress has been receiving rave reviews for her acting performance. Also, the actress is gearing up for Dhaakad which will be releasing next year and it is speculated the film is the most expensive action, thriller film ever to be made which highlights a female in the lead role.