Jamuna Dhaki: Arya, Rajanya, and other people who are waiting for Jamuna and Sangeet’s marriage falls apart

While we are waiting for Jamuna and Sangeet to reunite, many people, right at the household, do not want that to happen.

Popular Zee Bangla serial Jamuna Dhaki stars Sweta Bhattacharya as Jamuna and Rubel Das as Sangeet in lead roles. Jamuna and Sangeet’s relationship was never a cakewalk, and of late things have gotten particularly difficult.  While we hope the sail through the crisis this time around as well, numerous people in the family itself are going to rejoice if Sangeet and Jamuna part ways.

Sangeet’s pishi Ragini has always had her eyes on the wealth of the Ray household. She is not satisfied with the part of the house she has obtained and wants it all. Ragini, portrayed by Kanchana Moitra, has openly expressed her intentions to break apart the family time and again. Jamuna’s departure will help her break the family easily as Jamuna will not be there to stand up against her, like every other time. She has even supported Arya and expressed her desire to have her as Sangeet’s wife.

Rajanya, Ragini’s daughter, has learned and adapted the same personality as her mother. Since the beginning, she has insulted and exhibited her disgust towards Jamuna. She feels that Jamuna is not capable enough to be the Ray family’s daughter-in-law because she belongs to lower strata and plays dhak for a profession.

Sangeet’s aunt has always been an ally of Ragini, Rajanya, and Arya. She has had an equal contribution to all the problems and complications that were created in Jamuna and Sangeet’s life. She has her self-centered intentions of obtaining wealth, and that will only be possible if Jamuna and Sangeet get separated and the family’s unity is also shaken. 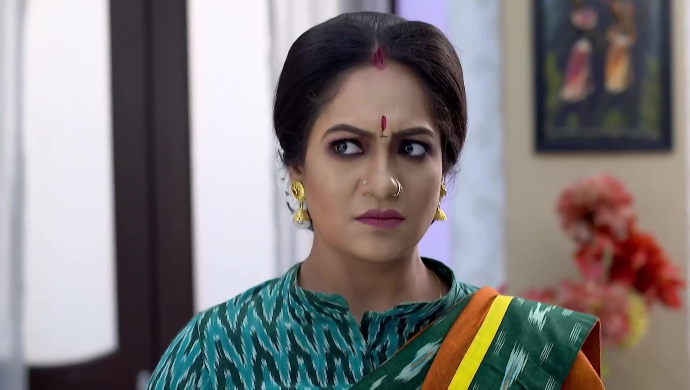 Arya has had her eyes on the prize since the day Jamuna and Sangeet got married. Initially, she just wanted to marry Sangeet but now her insanity and obsession have reached another level. She not only wants Sangeet for herself but also wants Jamuna out of his life forever. She has already stooped to an unbelievable low and we don’t see her stopping anytime soon.

Even before Jamuna got married to Sangeet, Bhushan has had ill intentions for Jamuna and her sister. In the past, he has tried to extort money from Jamuna’s family and has even laid hands on Jamuna’s sister, but because of Sangeet’s presence, he couldn’t do much damage. If the couple were to part, then Jamuna and her family will be at his mercy again and he can continue with his ill will.

These people are trying their level best to break apart Jamuna and Sangeet, but it will be interesting to see if they actually succeed in their attempts or our favourite couple overcomes this challenge and defeats the wrongdoers.

Watch Krishnokoli and other shows only on ZEE5.