On the release of Honsla Rakh, Diljit shared a heartfelt post for his co-star Shehnaaz Gill. Some fans who have seen the movie have tweeted very positive reviews about the movie and are totally loving it

Honsla Rakh, starring Diljit Dosanjh, Shehnaaz Gill, Sonam Bajwa and Shinda Grewal has today. Some fans who have seen the movie have tweeted very positive reviews about the movie and are totally loving it. The movie has good doses of laughter whilst covering some serious topics of parenting.

On the release of the movie, Diljit shared a heartfelt story on his Instagram account. He posted a picture of Shehnaaz Gill And himself posing together. He captioned Shehnaaz Gill saying that she is a very woman and should stay the same. Shehnaaz was seen in a mustard coloured sweater with minimum make-up and open straight hair. Dosanjh was seen wearing a red t-shirt with a cute red binny. 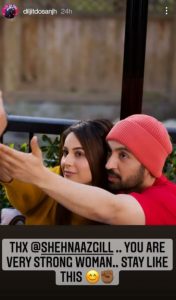 (Also Read: Honsla Rakh Lalkaare Song: Diljit Dosanjh, Shehnaaz Gill, Sonam Bajwa Grooving With Powerful Thumkas Will Make You Get Up From Your Seats And Dance)

Such incredible songs and catchy music have raised fans’ expectations for the film. Diljit’s previous work and talent has led him to be very successful so far and we hope he will continue to do a good job as well. Speaking of Shehnaaz Gill, she also appeared in music videos such as Majhe Di Jatti and Pindaan Diyan Kudiyaan in 2016 and appeared in Garry Sindhu’s Yeah Baby Refix music video. The actress and model is also a singer who released her debut single Veham in 2019, followed by her other singles Sidewalk, Range and Ronda Ali Peti. The trailer and the songs of the movie are wonderful and we wish them luck.