Deepika Padukone was spotted at Mumbai airport a day ago. Netizens took to their social media account to troll the actress for her look. They went on to call her Nashidi Queen

Deepika Padukone is one of the leading actresses in the Bollywood industry. She has a widespread fanbase that showers her with love and praise. The stunning diva often takes to her social media accounts and shares different photos and videos of herself that leave us gushing over the actress. Along with receiving love the B-Town actors also have to face the trolls. The same happened with Deepika Padukone when she was spotted a day ago at the airport.

When Deepika Padukone was spotted at the Mumbai airport a few people appreciated the actress for her looks and outfit while the others have brutally trolled her. They have taken to their comment section to call the actress Nashidi Queen. She received the same kind of comments when Deepika Padukone was interrogated in the drug case investigation that rose after Sushant Singh Rajput’s death. At that time the actress was trolled for consuming substances.

Speaking about Deepika’s yesterday’s looks, she was seen wearing a white shirt with balloon sleeves tied in the front over a black bralette. She paired the top with a pair of brown leather pants and completed it off with gorgeous black pencil heels. The actress was also seen carrying a black handbag with gold details as she made her way towards the airport entrance. 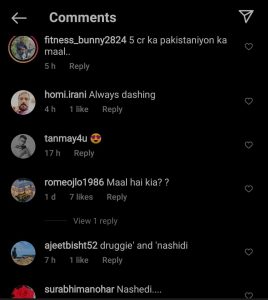 After watching this look of Deepika Padukone, netizens couldn’t stop themselves from calling Deepika a druggie and nashidi. One user wrote, “Maal hai kia? ?” while another commented, “Nashidi queen.” The other took to the comments section and wrote, “Yeh Mard hai ya worut ? I thought man is dressing like a woman,” while several others wrote, “nashedi.”

Meanwhile, on the work front, Deepika Padukone will be seen as Romi Bhatia in the Ranveer Singh starrer 83. She will also be seen as the lead in Pathan, in an untitled Shakun Batra film, a cameo role in Cirkus. Nag Ashwin’s untitled next is also in her kitty.