Kareena Kapoor Khan son’s Taimur Ali Khan was spotted outside his residence where he was dressed simply and looked like seen having a good time. Read to know more

Taimur Ali Khan and Jeh Ali Khan, Kareena Kapoor Khan’s sons, are also not less than celebrities. As soon as they leave their house, the tiny kids immediately attract the media’s attention.

Taimur Ali Khan was recently photographed outside his home, dressed in black jeans and a sky blue top with a mask as he follows the Covied-19 norms. It seems that Taimur had a good day.

The actress from Laal Singh Chaddha recently made headlines for spending quality time with her 4-year-old son Taimur. The mother-son duo was dressed brightly and stylishly for the occasion. Tushar Kapoor and his son Lakshya were also spotted. Kareena’s pals and their children can also be seen in the photo. 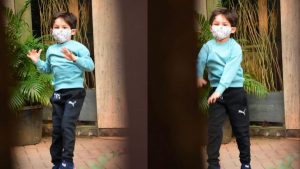 Kareena Kapoor Khan frequently posts photos and videos of herself and Taimur spending time together on her social media accounts. Taimur was also seen playing in the pool with balls in his play area in a video shared by the actress. In one snap, Taimur had a white ball in his palm, while in another, he was looking at the camera as he struggled to balance himself amid the balls. Kareena Kapoor used her Instagram account to post and share a video with her Instagram friends and followers.

Taimur examined the balls of various colors yellow, blue, purple, and white in the third shot. Even though Kareena did not add a comment to the photo, she utilized stickers that read mama’s son and playtime.

Kareena has also posted photos from Pataudi Palace when the entire family went for a trip to the palace. The actress took her Instagram to handle and shared a story where she took pictures of the moon she saw from the Palace and shared them on social media. Jab We Met actress shares photo with a shot of the moon and then share photos of ‘Chands,’ series with Saif Ali Khan, Taimur, and Jeh Ali Khan

(Also Read: Kareena Kapoor Khan Shares Photo Of Her ‘Beta’ On IG; THIS Pic Is The Cutest Thing On Internet)

Meanwhile talking about Kareena Kapoor Khan’s work front she will be next seen with Aamir Khan in the film Laal Singh Chaddha. The movie was originally set to release in February 2022, but now it will release on April 14, 2022.