Bigg Boss 15: Shamita Shetty And Nishant Bhat Get Emotional After An Ugly Spat; As The Actress Asks Him To Hug Her

Shamita Shetty and Nishant Bhat were seen getting emotional in the Bigg Boss 15 house after the two got into a nasty arguement. The actress went ahead to ask Nishant Bhat to give her a hug

Shamita Shetty and Nishant Bhat have been the best of friends ever since their stint in the digital version of Bigg Boss. Both Shamita and Nishant are often seen getting into arguements however the two always fall back together and are seen sticking around for each other.

In the episode of Bigg Boss 15 today, Shamita Shetty and Nishant Bhat were seen getting into an arguement over Shamita’s decision of saving Rakhi Sawant and downgrading Tejasswi Prakash. However, Shamita did not like Nishant’s point and the same happened with Nishant Bhat too. The choreographer ended up getting into a huge tussle with both his friends, Nishant Bhat and Pratik Sehajpal. After this fight, Nishant was seen sitting alone where Shamita joined him and tried to have a conversation with him. The actress tried asking Nishant as to what exactly is bothering him. Nishant, who was initially seen refusing to open up to the actress later was seen baring his heart out to her. Nishant told Shamita that he did not like how she did not respect him playing for her in the captaincy task and went ahead to save Rakhi Sawant inspite of Rakhi putting her through so much of emotional trauma and pain. Nishant revealed that when he loves someone, he tends to get affected which is why he was effected with Shamita saving Rakhi and not Tejasswi who has not put Shamita through as much pain as Rakhi has. Shamita who then understood his point was seen tearing up. Nishant too was seen shedding tears. When the choreographer decided to walk off, The actress asked him to hug her. However, Nishant refused. Well, the two finally ended up patching up the very next day and were seen hugging it out. 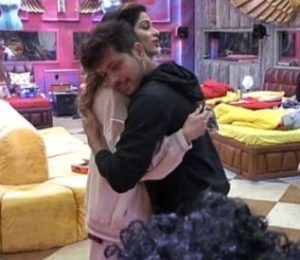 Well, what are your views on this arguement between Shamita and Nishant? Let us know in the comments section below.