In the recent episode of the popular and controversial reality show Bigg Boss 15 which is slowly inching closer towards its finale in the next few weeks, we see how Karan Kundrra and Nishant Bhat give LOSER jerseys to these two celeb contestants inside the house

In the recent Weekend Ka Vaar special episode of the controversial reality show Bigg Boss 15, fans saw that it was a star-studded extravaganza night filled with the glamorous element and filled up to the brim with entertainment factor as we all saw the biggest lineup of Tollywood stars like Jr NTR, Ram Charan alongside A-lister Bollywood diva Alia Bhatt and the ace filmmaker SS Rajamouli on the show with Salman Khan who promoted their much anticipated historical pan Indian magnum opus film RRR and then also celebrated the global Bollywood superstar Salman Khan’s 56th birthday.

Then we also saw that the much-talked-about Hindi remake sports biopic Jersey stars Shahid Kapoor and Mrunal Thakur came on the show to promote their film and also celebrated the Bollywood icon Salman Khan’s 56th birthday. Then they both danced with Salman Khan to Agal Bagal and post that they both came inside and interacted with the contestants and brought an exciting Loser No 1 task related to the Jerseys which had loser written on it.

Then they both called Karan Kundrra and told him to pick up Jersey and give his name for who he would like to give the Loser Jersey to in the house and also give in his reason for the same. Then Karan Kundrra took Rashami Desai’s name and added, ‘Mein ye Jersey kisi aur ko dena chahta tha originally but after watching the fan’s video, Mein Ye Jersey Meri Dost Rashami Ko Dena Chahunga’.

Giving his reason for the same he added that he is not understanding why is Rashami always so foolish and silly enough to be targeted by housemates as a back bitching person and also wants clarity from her as well. 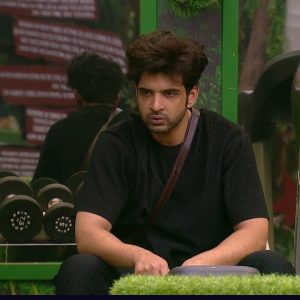 Then they both called Nishant Bhat next and told him to pick up Jersey and asked him that who would he like to give this and also told him to give in his reason for same. On this, Nishant Bhat said, ‘Devoleena Ko Ye Loser Ki Jersey Dena Chahunga As Unka Khelne Ka Tareeka Mujhe Pasand Nahi’.