Bigg Boss 15: Ieshaan Sehgaal Makes A SHOCKING Revelation About A TV producer; Is He Hinting At Vikas Gupta?

Bigg Boss 15 is high on drama and opening one’s secrets. Talking about the same, here’s a shocking reveal by contestant Ieshaan Sehgaal and we wonder if it was about Vikas Gupta

Bigg Boss 15 has been witnessing interesting twists and turns in every episode. The new turn being of the currently struck by cupid couple, Ieshaan Sehgaal and Miesha Iyer.

Ieshaan Sehgaal and Miesha Iyer had an intense conversation where Ieshaan revealed alot of things. He told her about his ex-girlfriend and said that it was not possible for him to be available for her all the times. He also said that he played along with a male personality from the industry. Ieshaan Sehgaal asked Miesha Iyer if she felt that he was bisexual. He told her that this person is also known to her. He told her, He was threatening to ruin Ieshaan’s reputation and also publish negative articles about him before he entered the house. So he had to play along to sustain. Everyone does that at some point of the time. This is how it works. Aise logo k saath aise hi kaam nikalna padta hai. He was creating problem. 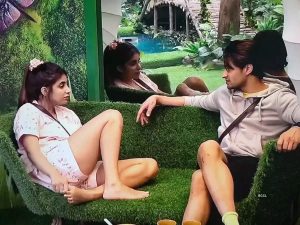 Ieshaan Sehgaal said that he tried to deal with the problem in his own way. Miesha Iyer asked him to define the exact meaning of playing along. Ieshaan Sehgaal tried to hint that he kept friendly relations to avoid controversy. He said, And that’s why he said, he might try to do the same once they come out. Ieshaan doesn’t have any scene but he creates a major scene. He doesn’t know if he is your friend or not. Ieshaan asked Miesha if she thinks that he’s a bi? He was playing around with him. In fact, people already started guessing the name of the TV producer and are naming Vikas Gupta.

(Also Read: Bigg Boss 15: What? Miesha Iyer Wants To Meet Boyfriend Ieshaan Sehgaal’s Mother But is Scared Of This)

Ieshaan Sehgaal is a model and has worked in some shows. On the other hand, Miesha Iyer was in MTV Splitsvilla and Ace Of Space. The two are also nominated this week. We have to see if any controversy with the producer does happen after Ieshaan Sehgaal comes out of the house.