Anushka Sharma, Yami Gautam And Others- Bollywood Celebrities Who Tied The Knot In A Hush-Hush Ceremony

Bollywood celebrities have a public life, and it always seems complicated to them to keep anything under wraps, but somehow they get married secretly

Dome stars have often got hitched in front of the camera, just for the sake of a film and have been a part of dreamy weddings on screen, but in real life, there are a few who like to keep things private. Here are stars who chose to keep their marriage news away from the public.

This wedding was the most upcoming highly Sought event of the year where the media was puzzled about where it was going to happen. There was so much pressure to keep their wedding a secret that Anushka Sharma and Virat Kohli used fake names while planning the entire event. They booked the event and asked the guests to stay tight-lipped too. When images of the couple with their respective families at the airport started doing the rounds, Anushka and Virat remained quiet and didn’t respond. Post the dreamy wedding in Tuscany; the power couple announced their union on Instagram and the world burst with joy over their marriage.

Actress Yami Gautam surprised fans with her wedding announcement on Instagram this year. It was not even under speculation whether Yami was dating anybody. She was dating director Aditya Dhar all the time, and their secret wedding was all things romantic. It was a very private wedding with a village setting away from all the limelight and bling. Many netizens loved the simplicity of their wedding and wished the couple good luck. It was one of the most private celebrity events in history.

While rumours of a romance between the couple had been making headlines for years, Rani and Aditya always denied the rumours of them dating. It was reportedly said that Rani was the reason behind Aditya Chopra’s divorce from his first wife; they got married anyway. An official statement was released from Rani Mukerji and made the world know that she was now married to Aditya Chopra. The couple had flown to Italy in a private setting, and only close family, along with Karan Johar and Vaibhavi Merchant from Bollywood, were present. 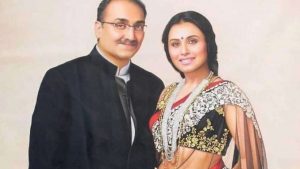 Well, Bollywood knows to keep it a secret.