Parineeti Chopra wishes her brother-in-law, Nick Jonas on his 29th birthday. She shared throwback pictures on her Instagram stories wishing the singer

Nick Jonas has turned a year older today. His wife and actor Priyanka Chopra Jonas hosted a surprise birthday party for him. She also wished Nick on her Instagram account as she dropped a picture from the birthday celebration. The fans of the both dropped comments wishing Nick Jonas on his birthday. Several actors in the industry also wished Nick Jonas on his 29th birthday. Joining them was the Hasee Toh Phasee actress Parineeti Chopra. 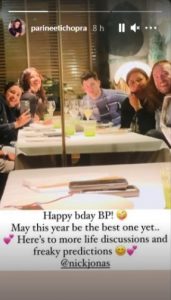 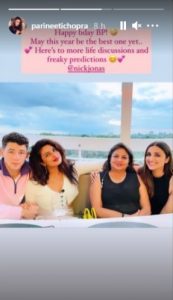 Priyanka Chopra Jonas while wishing Nick Jonas wrote on Instagram, “Love of my life. Here’s wishing the kindest most compassionate loving person I know a very happy birthday. I love you baby..Thank you for being you.” Later, Nick Jonas also reposted the same picture and thanked his wife for the beautiful surprise she arranged for him.

Talking about Parineeti Chopra’s work, she was last seen in Saina, Sandeep Aur Pinky Faraar and, The Girl On The Train. While Priyanka Chopra Jonas has been busy working on her upcoming series Citadel. She will also be seen in the romantic comedy Text For You. Priyanka Chopra Jonas will also be seen in The Matrix Resurrections. She recently announced her Bollywood film Jee Le Zaraa with Alia Bhatt and Katrina Kaif. The film will be directed by Farhan Akhtar.