Mila Kunis defended her and Ashton Kutcher’s Comments About Not Bathing Their Kids.

“Until You Can See Dirt On Them, otherwise, there’s no point.” is what their remark was on bathing their children And Called The Debate “So Dumb” once it started being discussed. Fall may have arrived, but the great celebrity bathing debate of summer 2021 is certainly still lingering in the air. How much dirt is too much dirt?

Hollywood power couple Ashton Kutcher and Mila Kunis have a rather unconventional way of raising their children. One might know Mila Kunis from ” Friends with Benefits” and Ashton Kutcher from ” Two and a half Men”.

If you’re just catching up, this summer Ashton Kutcher and Mila Kunis opened up a worldwide conversation about celebrity bathing habits, after they revealed that they don’t believe in washing their kids — or themselves — with soap every day.

Speaking on the Armchair Expert podcast in July, the couple told hosts Dax Shepard and Monica Padman that they don’t wash their children — Wyatt, 6, and Dimitri, 4 — unless they can “see dirt on them, otherwise there’s no point”.

Mila Kunis and Ashton Kutcher married in 2015 and share two kids together, Wyatt Isabelle Kutcher and Dimitri Portwood Kutcher. Ashton Kutcher and Mila Kunis met on “That ’70s Show” but didn’t start dating until years later. Both actors were in serious relationships with other people before they rekindled in 2012. 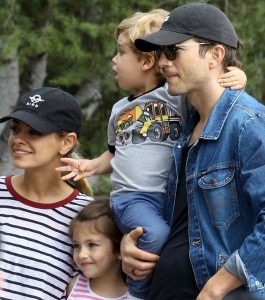 Mila is doubling down on her comments after she sparked a debate about bathing habits in July.

As for themselves, Mila went on to confess that she “didn’t shower much anyway” as a child. Kunis revealed that she didn’t have hot water growing up that made her skip the routine shower. The actress though admitted she washed her face twice daily. While Ashton, on the other hand, said he washes his “armpits and crotch daily and nothing else ever.”

These comments went on to spark a wave of debate among fans who had plenty of thoughts on the couple’s bathing revelations. Many memes, tweets, and posts were made by fans related to these comments. Someone even wrote, “Ashton Kutcher and Mila Kunis treat their kids like I treat my jeans,” on Twitter.

Kunis and Kutcher’s intimate yet gross revelation had most wondering why the couple did not believe in personal hygiene. Since this concerns their kids more than them, it was necessarily concerning.

The revelation comes at a time when personal hygiene is being endorsed the world over due to the pandemic. An intimate comment on hygiene is bound to cause debates in a state of a global pandemic.