World population crosses the 8-billion mark today; India to emerge as the most populous country next year 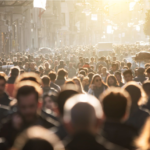 In 2023, India is expected to overtake China as the world’s most populated nation.

According to the United Nations‘ (UN) most recent estimates, the world’s population may reach 8.5 billion people in 2030 and 9.7 billion by 2050.

The populations of 61 nations are expected to decline by 1%

UN Secretary-General Antonio Guterres said, “This year’s World Population Day falls during a milestone year when we anticipate the birth of the Earth’s eight billionth inhabitant. This is an occasion to celebrate our diversity, recognize our common humanity, and marvel at advancements in health that have extended lifespans and dramatically reduced maternal and child mortality rates”.

He added, “At the same time, it is a reminder of our shared responsibility to care for our planet and a moment to reflect on where we still fall short of our commitments to one another”.

Between 2022 and 2050, the populations of 61 nations are expected to decline by 1% or more as a result of low fertility rates and, in some circumstances, high emigration rates.

Globally, the life expectancy at birth increased to 72.8 years in 2019

More than half of the projected increase in the global population up to the year 2050 will be concentrated in eight countries: the Democratic Republic of the Congo, Egypt, Ethiopia, India, Nigeria, Pakistan, the Philippines, and the United Republic of Tanzania.

Globally, the life expectancy at birth increased to 72.8 years in 2019, an almost nine-year rise since 1990.
It is anticipated that further mortality declines will lead to an average worldwide lifetime of roughly 77.2 years in 2050. But in 2021, the least developed nations’ life expectancy lagged 7 years behind the global average.

This article World population crosses the 8-billion mark today; India to emerge as the most populous country next year appeared first on BreezyScroll.