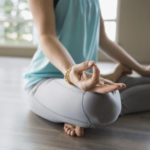 A new study reveals practicing mindful meditation is just as effective as medication to reduce anxiety. Read to know more about the new study.

Meditation is equally effective as medication for anxiety

The first study directly comparing meditation and medication for anxiety reveals that both methods are equally good and reduce symptoms. Published in the JAMA Psychiatry, the study shows people struggling with the condition can get help with a daily pill or by practicing mindfulness. While medication is significantly less time-consuming than meditation, it comes with some side effects. As per the Anxiety and Depression Association of America, about 6.8 million suffer from the disorder in the US. However, less than half receive treatment.

“For both treatments, we had people who said, ‘This worked,’” stated Dr. Elizabeth Hoge. In addition to being the leader of the study, Dr. Hoge is the associate professor of psychiatry and the director of the Anxiety Disorders Research Program at Georgetown University Medical Center in Washington, D.C.. The study included 276 patients suffering from generalized anxiety disorder. Half of them revived escitalopram, a common antidepressant while the rest were in a stress reduction program focused on mindfulness.

What does the study show?

While both groups reported improvements, there was an overall reduction of 20 percent, irrespective of the type of treatment. However, the side effects were more common for those taking antidepressants. Almost 80 percent of the patients experienced at least one side effect such as nausea, decreased libido, headaches, increased anxiety, and trouble sleeping. However, only 15 percent of participants from the group practicing mindfulness experienced an increase in anxiety.

The study reveals “there are alternative options that don’t involve medicine to help treat anxiety, that is just as effective,” stated Lindsey McKernan. McKernan is an associate professor of psychiatry and behavioral sciences at Vanderbilt University Medical Center in Nashville.

“That kind of benefit is consistent with other studies of medications to treat anxiety,” stated Craig Sawchuk. Sawchuk is a psychologist at the Mayo Clinic in Rochester, Minnesota. McKernan and Sawchuk were not involved in the study.

This article Study reveals mindful meditation is as effective as medication to reduce anxiety appeared first on BreezyScroll.