At least 32 transgender people killed in the US this year: Report 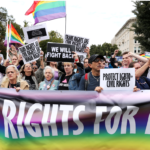 Prior to the Transgender Day of Remembrance on Thursday, the Human Rights Campaign revealed in its annual report that at least 32 transgender and gender nonconforming people have been killed in the United States in 2022.

81% of known victims this year who identified as transgender were individuals of color, with 59% being Black.

Since recording such killings began in 2013 — the same year the FBI started keeping track of hate crimes against transgender people — the Human Rights Campaign has recorded at least 302 violent deaths of transgender and gender nonconforming people.

The victims have been “overwhelmingly Black, under 35, and killed with a firearm,” the report states.

63% of all victims since 2013 have been black transgender women, like Shawmaynè Giselle Marie, a 27-year-old nursing aide who was assassinated in Gulfport, Mississippi, in June.

The data excludes suicide deaths, which have also been shown to be much more common in LGBTQ people

This week is Transgender Awareness Week, which culminates with Transgender Day of Remembrance on Sunday. This global event honors those who have died as a result of anti-transgender violence and raises awareness of the dangers trans people face.

According to the Human Rights Campaign, the actual number of fatalities is likely underestimated because transgender people’s deaths sometimes go undetected or the victims are incorrectly identified in press or police reports. The data excludes suicide deaths, which have also been shown to be much more common in LGBTQ people than in the general population.

Inmates in jails, prisons, or ICE detention facilities have killed 15 trans people since 2013, including two this year, the research revealed.

Fewer deaths have been reported than at the time of the publication of last year’s report — 47. In 2021, the Human Rights Campaign recorded its highest total of fatal violence against trans and gender-nonconforming people, with 57 deaths by the year’s end.

This year’s report, according to Shoshana Goldberg, public education and research director for the HRC Foundation, comes during the largest wave of anti-trans legislation at the state level ever, which has been mostly fueled by misinformation and stigma, she added.

Some proposals seek to restrict the discussion of LGBTQ issues in schools, gender-affirming medical care, and the participation of transgender kids on sports teams and in the use of toilets consistent with their gender identification.

Such legislation, according to her, encourages anti-LGBTQ sentiment by portraying queer and transgender individuals as a danger to kids and communities.

According to the research, 25 anti-LGBTQ laws have been passed by states so far this year, 17 of which target transgender persons. The Human Rights Campaign has never seen as many anti-transgender measures proposed in a state legislative session as there are currently in 34 states, totaling over 145.

Despite the fact that the legislation does not explicitly call for violence against LGBTQ people, according to Goldberg, they impose a culture of prejudice that is frequently made worse by racism and sexism and increases the likelihood of lethal violence.

This article At least 32 transgender people killed in the US this year: Report appeared first on BreezyScroll.